Sure it's only category 3 ?

Someone asked me at The Last Resort Why I would not be White Water Rafting.

"Sure it's only category 3" was my response. After all, James and I had conquered Category 5 (the most demanding) on the Zambezi in 2008; many other rivers had been notched up earlier - in the Rockies, the Andes, in Australia, Turkey and beyond.

So when the manager approached me and said he'd like to offer me a complimentary place rafting the next day, I was of two minds. "Sure it's only Category 3" I told myself. Oh, what the heck, "Sure, why not! Thanks!" 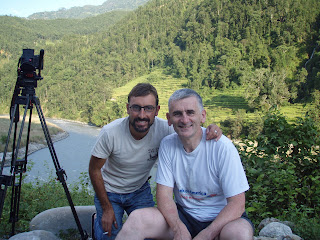 I found myself in a raft with Mirco, an Italian photographer filming a promo on travel and tourism in Nepal Tibet and China, two of the tiniest Chinese girls you have ever seen (not much raft propulsion expected there) and two rather larger ladies (I won't comment).

Well, I thought, "Sure it's only Category 3." Mirco looked cheerfully at me and asked if the head-camera on his helmet was pointing the right way. I assured him it was.

After the usual how-to and safety briefing, we headed off, practicing Forward! Back! Get Right! Get Down! All the usual stuff. Intentions were clearly beyond question; effectiveness? let's not go there.

The river was running very fast but the rapids did not look terribly intimidating. "Sure it's only Category 3", I reminded myself.

The first 90 minutes passed pleasantly: the scenery was spectacular and some of the rapids were quite long so there were some signs of adrenalin before we pulled over for a lunch break.

I chatted to Nora - a Corkonian working with Mirco - about their project and observed that the footage so far was probably fairly tame. "Sure it's only category 3" I intoned.

Off we went for the final hour. Mirco checked his head-cam was recording and we paddled ahead into the unknown.

Rivers have a character of their own, much like a woman, I suppose: her own unique tŵists and turns, her own temperament, sometimes quiet, other times tempestuous. I was about to discover this filly's foibles awful soon.

A successful rafting trip needs at least 3 key ingredients: a good guide who knows the river and the lines to take, a strong crew who work together to generate the right propulsion at the right time, and effective communication between the two. Our guide seemed to know his stuff. The crew: I've covered that already. As for communication, well, we had already experienced some confusion because of the guide's high falsetto voice and his tendency to issue every command in the same urgent tone. You can see what's coming.

After paddling reasonably hard for several minutes we entered another stretch of white water in a narrow canyon with a steep cliff on both sides. It was quite choppy and the river was running as fast as ever. And then we had one of those moments: when everything happens all at once and yet in slow motion too. We hit a back wave in the river the wrong way and she tossed us in the air and flipped us unceremoniously without a second thought. The Bitch.

The water wasn't cold but the shock of hitting it and sinking deep under took me by surprise. Somehow the Guide's advice "if you do get flipped, don't panic" seemed far away in my mind. Still gripping the paddle (we had been warned not to lose it), I surfaced a few metres from the upturned raft. Before I could swim toward it however the River was already sweeping me downstream.

When I realised I was not going to make it back to the raft I looked about and started to swim towards a safety kayaker. The noise of the rapids and the churning water disoriented me but I latched on to the kayaker like a baby marsupial and soon found myself at the bank. I coughed and spluttered for a moment and tried to get my bearings. I noticed I had blood in my mouth and was relieved to discover a cut on my the cheek was the cause rather than a lost tooth.

I saw our raft alongside a second up the river and walked towards it. While the crew of the second raft greeted me warmly, I couldn't help noticing no one else from my crew was around.

Micro appeared in a few minutes with a broad grin, happy no doubt that he now had some footage worthy of a documentary. Two of the girls appeared within another 10 minutes but the little Chinese girls were nowhere to be seen. My overactive imagination wondered if some giant mythological giant Crane had swept down and snatched them away. In fact, one was about 100m downstream; the other had sustained a bad blow to her mouth (possibly from another rafter's paddle) and was sporting a very nasty gash. She was even further downstream.

We headed off for the final few kilometres and the remaining journey passed without incident. We beached the raft and changed into dry clothes. The little Chinese girl was taken to hospital for stitches and the rest of us got to review the day"s events.

- Posted using BlogPress from my iPad
Posted by Bob Semple at 22:17