Champagne with the Rajah 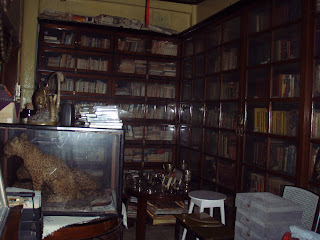 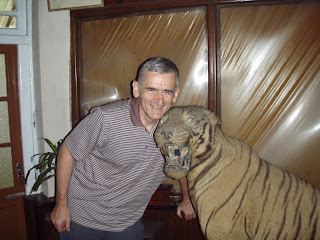 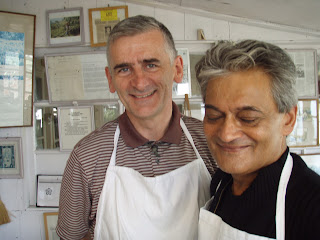 Makaibari is the producer of the world's finest tea. Located in Hills of Darjeeling, it is the oldest of all Indian tea gardens and has been in continuous operation since 1859.

We visited the plantation and factory and were warmly greeted by Rajah Banerjee who took us expertly through a structured tasting of 6 of their teas from the so-called First Flush (initial spring harvest) to the most expensive Silver Tips Imperial ($1,600 per kg).

I could have been at a Master of Wine tasting of fine wine (the Raj apparently liked my slurping action - sucking air throughout the tea (otherwise know as slurping) to get the full benefit of all the volatile organic compounds (smells)).

Banerjee is one of a kind - a combination of old colonial India and modern man. Pioneer in biodynamic principles for tea production, he is a polymath - well educated, broadly read and a fountain of energy. When he elaborated his explanation in terms of Hindu beliefs and how each night one part of each of us escaped to the astral plan, I have to say he lost me; but for sheer irrepressible exuberance he was intoxicating.

We had stayed with local families the night before, one of the many initiatives sponsored by Makaibari to build capacity and develop sustainable businesses in the community.

Side story:
My 'Fear a Ti' was Sri Indna Kumar Lama, an absolute gent, who worked in nearby Tung as a government supervisor. His wife was a charming but shy lady who spent much of her time with their 2 daughters, one about to pursue a Masters in English and another (16) still at school.

Mr Lama really was the Man of the House. After preliminary introductions, he invited me to sit in their kitchen and we exchanged pleasantries. A Buddhist, I wasn't sure how the offer of a glass of 12 year old Jameson's would go down. But he beat me to it and offered me 'a glass of brandy' (which turned out to be a very acceptable Indian Scotch). His brother joined us and, after the cork had been withdrawn and replaced a few times, the conversation began to flow quite nicely. We didn't eat until much later, at which time, the food presented resembled Michelin Star restaurant fare.

Back to the Raj:
Banerjee displays a passion and enthusiasm that is rarely seen. At the end of the tasting he invited us to join him at his home for some further refreshments after we had taken a short tour of the plantation.

The short trip through the tea plantation provided ample evidence of his sustainable farming philosophy. Visiting his house was almost surreal experience. In what I have realised is a thoroughly 'Indian' phenomenon, the huge house, sitting on a local hilltop with a stunning view of the valley, looks like it has been neglected and is decaying almost visibly in front of your very eyes. I found myself itching to clear the moss and algae from the walls of the house and slap a fresh coat of paint to do justice to the fine structure.

The outwardly dishevelled appearance was matched inside with a sort of careless indifference mixed with anarchy. Two enormous alsatians bounded out to inspect us, great pink tongues pulsating between ridiculously large canines that screamed for fresh meat (okay, that was the adrenalin I always get when greeted "enthusiastically" by any creature capable of consuming me for tea). An electricity breakdown added a certain spookiness to the scene - and filled me with the presentiment one might feel entering the castle of Count Dracula.

Two portable solar lights cast a garish glow over the large lounge, an extraordinary combination of present (a 60" plasma screen) and past (enormous stuffed tigers, trophy Bison and other game). His library (behind glass doors) begged to be inspected: with Harvard volumes from the 30s among literary greats and first editions of a huge variety. This was a display of haves and have nots.

That said, you could not imagine a more gracious host. When one of the group told him it was my birthday he insisted on opening champagne. For the next hour, we were entertained to endless stories of the Rajah's development of his 700 hectare holding, of orders from the Sultan of Brunei ($10,000 a kilo for the best tea in an unique presentation (pure silver caddy etc), of community partners (not a workforce of some 900), of how the $2 a day wages equated really to about $10-12 when you took into account the school, creche, women's development programme, home stay initiative and more. And "Oh Bob, you must have more champagne!" and another bottle got popped before you could say "hangover".

Suffice to say I felt very little on the especially bumpy ride to Darjeeling later that afternoon. The Raj's admonitions that we weren't so much taking a road as a riverbed to Darjeeling, resonated strongly.

- Posted using BlogPress from my iPad
Posted by Bob Semple at 19:31