The Road to Tibet

Neither the Bungy nor the Canynon Swing really appealed (especially after a doctor tourist told me that one of the key risks for over 50s doing a Bungy is a detached retina - eh, no thanks!). A modest little bike ride up the road seemed admirably preferable. Up the road, that is, to Tibet. A little different to the usual Sunday spin to Ashford.

I even persuaded someone I met at Last Resort to come along with me but it turned out that there were no spare bikes. It was me and Naraj - a wiry Nepali about 4 stone lighter than me (a distinct advantage going uphill!)

The Road is the main commercial link between Nepal and Tibet but I had been warned that the road was busy - and prone to landslides. Quite. But, sure, it was only 15k. . . . 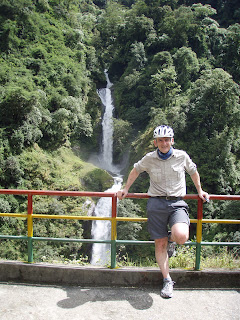 Off we headed - downhill, to my surprise. Not for long. The ascent started and I got to exercise the gears (24) to good effect. All went well until the first landslide. Looking up to the right, it looked like someone had dynamited a huge chunk of the mountain; which, obediently, had rolled down, swept away a chunk of the road and kept on going down a steep precipice on the left to the valley below.

The trucks ahead crawled ahead carefully, negotiating potholes, mucky tracks and new streams which raced to the valley below oblivious to the difficulties they posed to road users. The fun part of course came with the little valleys (and consequent hills) that the careless landslides had gouged from the road. Trucks typically gunned down the descents hoping to have enough momentum to carry themselves up the far side. Most of the time they succeeded. Some need several attempts. A few required a team of helpers to overcome the slippery slope.

When a break in traffic appeared I picked my line and pressed ahead. I have to confess I took in none of the spectacular scenery - all my attention was on keeping upright, avoiding the heaviest muck, boulders and other obstacles and making my way to a safer surface ahead.

The gradient got steeper and the landslide challenges increased. Naraj told me that the trucks sometimes took up to 5 or even 10 days to pass the border. From the congestion and road condition I could understand why.

15k ended up taking two and a half hours! And that, according to Naraj, was the best time he had taken. Poor road surfaces and a few thousand feet climbing meant my shirt was stuck to my back by the time we got to the border, at a nameless chaotic village.

The spin back was - predictably - magic! I didn't measure it exactly but I reckon we covered the two and a half hours up in about 40 minutes going down.

- Posted using BlogPress from my iPad