Time first stands still - the spectacle of the mountains intoxicating. Already three hours after sunrise, the early morning sun has burned off the low lying cloud and brightly illuminated the icy peaks of Kanchenjunga, sacred peak of Sikkim, the world's third highest mountain. 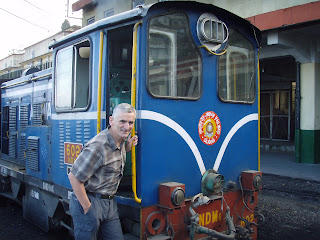 A loud hiss from an adjacent diesel locomotive stirs me from my reverie. We are sitting in an old carriage of the Darjeeling Toy Train, de-coupled for now, awaiting the real prize of the morning, one of the original steam locomotives. We are headed for Ghum, a short distance as the crow flies but a Herculean expedition in the mountainous landscape of Darjeeling: starting at 6800 feet we face an ascent of nearly 800 feet on our short journey.

A sudden jar announces the arrival of the engine as it couples to the two carriages, astride a ridiculously narrow gauge (hence the moniker 'Toy Train'). A shrill whistle starts the clock running backwards - back to the grand old colonial era when the sun never set on the British Empire.

As expectations rise, a smiling face appears at my window and the sales patter begins. "You like Sir?" she asks, spreading a richly woven cloth across her outstretched arm. The fabric is magnificent, brilliantly coloured and soft to the touch. "950 Rupees - finest quality Sir!".

The woman is middle aged and dressed traditionally in a gold embroidered sari. She sports a red tikka on her forehead, announcing she is married. Her dark brown eyes are almond shaped - and laughing.

I decline using a now well practiced list of polite reasons but I have misjudged Laughing Eyes. She has an answer for every refusal. Too big? Look at this smaller one? Wrong colour? Look, Sir, at these ones (rainbow colours duly appear). Too heavy for your baggage? Let me show you, Sir - see how small this folds up.

Predictably, the first price reduction is announced: "For you, Sir, 650 Rupees". A look of supplication. Now Laughing Eyes pauses, eyebrows raised to check my reaction. Remaining resolute, I am treated to a second round of reasons to buy. I think to myself "If only I could get her to Dublin and have her teach a class on selling skills".

"400 Rupees", she announces. For the first time, the laughing sparkle in her eyes has dimmed. "First sale of the morning" she adds somewhat lamely, acknowledging her failure to complete a sale at a higher price.

I feel rather guilty with my continued refusal but in an exchange of looks we each realise the other has declared their bottom line. Laughing Eyes folds her Pashmina and moves to her next prospect.

A long screech from the whistle admonishes my inattention and, with a violent lurch, we begin our trip. The time travel gets into serious reverse as we judder our way from the station. Familiar rhythms surface deeply buried childhood memories. I listen carefully to the cadence of the engine: four distinct beats, the first three audible, the fourth silent, a recovery before the next cycle. The emphasis is on the second puff: one-TWO-three-(pause), one-TWO-three-(pause). Depending on the gradient, the engine beats steadily, easily canters or grinds slower and slower until you feel you should be getting out to help the poor lady up the hill.

Looking out the carriage window reveals the splendour of the valley on one side and the faded glory of better years on the other. All quintessentially British, Old Chap.

After 20 minutes of time travel we are shocked back to the twentieth century when we stop to pay respects at a Gorkha Memorial. All around Darjeeling, signs of GorkhaLand quietly but firmly protest a proud tradition that spans both India and neighbouring Nepal. In fact, Nepali is the language of choice, man-made borders quietly ignored by deeper traditions. 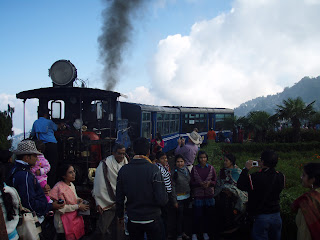 Inspecting the carriages during our brief stop I am surprised to discover their year of manufacture: 1990! Faithful reproductions of a bygone age. Even the engine dates only to 1933, albeit sporting two rebuilds since them (solemnly recorded with beautiful freshly polished brass plates).

The one-TWO-three-(pause) rhythm quickly reclaims me to the nineteen century and our adventure continues.

We arrive at Ghum for a 30 minute stop, just the right time to wander through the Museum. Apparently Darjeeling is a UNESCO World Heritage Site. No wonder. It's everything any decent time traveler could expect.


- Posted using BlogPress from my iPad
Posted by Bob Semple at 10:31