I started my Saturday morning searching for Mother Teresa's Hospice for the Sick and Dying.

I failed. I found the old building. And I had been to the Mother House where I had seen Mother Teresa's tomb. But the new Hospice was nowhere to be found. I must have asked a dozen Taxi drivers - no joy. I tried four policemen - clueless. Innumerable locals - they kept directing me to the old building, now derelict.
I gave up and opted for my second objective: Loreto Sealdah, founded in 1857 - by sisters from Loreto in Rathfarnham (where I went to kindergarden). It was Aisling's suggestion to visit: she insisted that the lady in charge there was quite a character and (rather incredulously) drove a motorbike. Thank you Aisling - what an amazing day I had. 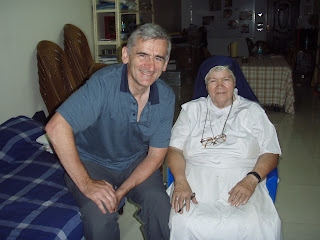 Sister Cyril is 75, not that you'd think it (I reckoned late 50s). She is a bundle of energy. Her surname is Mooney, she comes from Bray, and her sister, it turns out, lives less than a mile away from me in Dublin. She joined Sealdah in 1979. And, boy! Is she in charge.
I literally wandered in off the street (something the Sisters encourage, as will become apparent) and marched into the Office. I announced myself and the secretary said that Sister was tied up but if I waited a few minute she'd tell her I was waiting. Given it was Saturday, there were no classes and yet the place was buzzing.

"In the meantime, you'll have a cup of tea".

It was a statement. Who was I to object?

When Sister Cyril Entered the Office, you could feel the collective pulse quicken - not at all aggressive, rather a quiet, certain strength presented. The accents and the connections came tumbling out. Her sister in Foxrock, my working with Sabuj Sangha, Loreto training the Sabuj Sangha teachers, my kindergarden in Rathfarnham, Robbie and Aisling's volunteer trips teaching. We were best buddies in no time.

She told me about some of the comings and goings of the day and then suggested I might like to see a short video. I was ushered into a staff room (a nice fan to counter the humid Kolkata heat) and the video started.

What an amazing lady. On the basis that actions speak louder than words, prepare yourself for some staggering statistics:

- when Sr C arrived there were 700 students, all fee paying except for about 20 who were too poor; now there are 1400, half of whom pay (handsomely) and half who pay nothing.


- 20 higher secondary schools have been built
- on the Eastern Bypass, a slum area beside the high speed electric train (nice contrast?), 75 teachers have been trained, 11 schools started and 1,200 children taken on
- on the brick fields, which operate using migrant workers, 26 hedge schools have been started and over 1,300 children catered for
- 247 street children in the heart of the city have been taken In to the school, clothed, fed and housed in a special programme called the Rainbow Kids

- and there's more: micro credit, an abandoned older people programme, teaching by the students themselves in rural areas(!), a childline, human rings education, a "school in a box" programme - the list goes on and on.


In total, it is estimated that Loreto Sealdah - just one little underfunded school - has impacted the lives of over 450,000 children.
All under the direction of Sr Cyril.
(and the only reason she has stopped riding the motorbike is that they can't get any more parts for it. Apparently it was the last Lambretta to be imported to India in 1979).
Now that's what I call One Serious Lady. 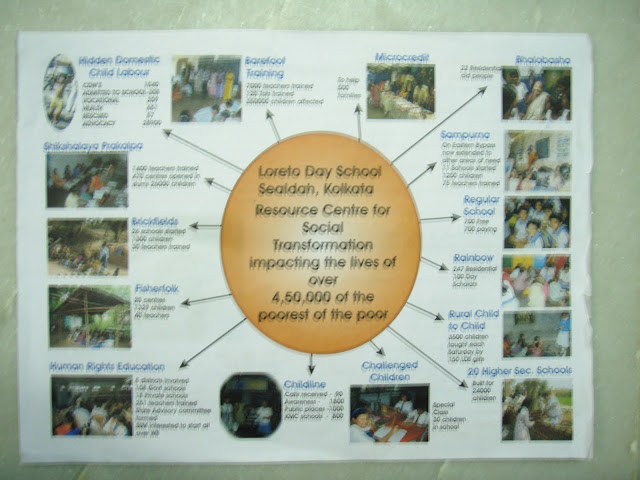